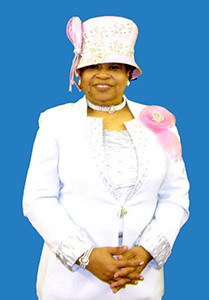 He that dwelleth in the secret place of the most High shall abide under the shadow of the Almighty.  I will say of the Lord, He is my refuge and my fortress: my God; in him will I trust. Psalm 91: 1-2

Jacqueline was born January 1, 1952 in Callands, VA to the late Frank and Elsie Witcher. She is the tenth child of ten children.

She worked at Sale Knitting, later known as Tultex Knitting for almost 29 years, before closing down. Jacqueline used her skill of sewing, to start an alteration business in her home. She design and redesign ladies hats, loves to decorate, and loves cooking for her family and friends.

A True Proverbs 31 woman, she is very hospitable and has a giving spirit. Over and over again she demonstrates her love for the people of God and the House of God. She works well with her hands for her family, church family, neighbors, and friends.

In the mid 1960’s she became a member of Mt. Zion Way of the Cross Church in Callands VA, where she met Larry E. Robertson Sr. They were joined in marriage on August 7, 1971. To this union five children were born, Cynthia, LaTonya, Monica, Larry Jr. and Justin.

Jacqueline worked faithfully with her husband through his ministry at Mt Zion, where he was a Deacon, and at New Life Apostolic when he accepted his call into the ministry. She continues to work faithfully with him as he pastors the Fairview Baptist Church in Gretna, VA.