Home > Our Church > Our History

1882 to 2015 and counting. The Fairview Baptist Church, Gretna, VA was founded in 1882, with Rev. J. L. Logan elected as Pastor of the flock.
Through the 133 years, it was the will of our Heavenly Father to have called all of the charter members to rest. He has blessed us to have many of their children and their childrens’ children to continue to serve the Lord within these gates today.

The congregation worked very hard to find a place of worship when the Church was first organized. The members purchased a small lot Nov. 13, 1891 for $60 and began to build a small frame church. They organized Deacons, Trustees, Sunday School, Missionary Circle, Mid Week Prayer Service – held at each member’s home, Treasurer and Choir. After having served diligently for so many years Rev. Logan offered his resignation.
History reveals the church was destroyed by fire in the early 1900’s. It is by word of mouth that the history of our church is told. For the memories and events have been passed on that we might know from whence we came. A sketch of this early structure was drawn by Brother Darrell Crews. 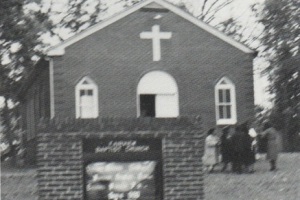 The church elected Rev. M. L. Burton. During his leadership, more souls were added to the church. The members then purchased another lot where we continue to send up praises. After many years of services, Rev. Burton offered his resignation.
In the 1930’s Rev. R. G. Gilbert was elected. Under the pastoral duties of Rev. Gilbert many accomplishments were contributed to the church structure to include remodeling, enlarging and brick casing, and a basement. After many years of faithful service, Rev. Gilbert offered his resignation.

In the early 1940’s Rev. Harris was elected and served a short time with the Fairview Baptist Church. He offered his resignation.
On the 11th day of Oct, 1944 for a cost of $10, the deed to the cemetery was printed in the Circuit Court for the Fairview Baptist Church (colored).
In 1945 the church elected Rev. Gilbert for a second term. He served 29 more years. God continued to bless and more souls were added to the church with baptism in a little creek about a mile or so below the church.

In the year of 1974, the church elected Rev. Penick H. Wagstaff. Pastor Wagstaff was an outstanding Proclaimer of the Word; a gifted pianist, organist, singer and artist. The Scholarship Fund was organized during his pastorship. He drew the first blue prints of the adjourning sanctuary which was erected/built in March of 1985 by contractor G.L. Atkinson, Hurt, VA. Pastor Wagstaff served from 1974 to 1990, 16 years.
Rev. Derrick Whittle was elected Pastor from 1993 to 1994. The New Life Choir, Vocational Bible Study, Youth Rap Sessions, and the Pastor’s Aide were organized under his pastorship. Rev. Whittle was an advocate for kneeling at the alter for prayer.

In 1994 the church note on the adjourning sanctuary that was built in 1985 was paid off in full.

In 1994 Pastor Hubert White was elected pastor of the Fairview Baptist Church. He organized the Male Chorus, Combined Choir, Mother’s Board, Women’s Conference, out – of – town fellowship and worship services, Nurses Unit, 2 Nursing Home Ministries and the Flower Committee. Pastor White shared his vision from God about a need to build a new sanctuary for the future. A bid was submitted by the Hairston Construction Company outlining cost for a new sanctuary prior to the business meeting held on September 24, 2004. 7/10ths of an acre of land was donated by Larry Owen in recognition of Mother Berkley Waller on November 25, 2004. During his pastorship, many souls were added to the church. Rev White pastured faithfully for 11 years until his health declined in 2005. 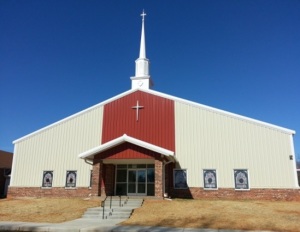 Bishop Larry E. Robertson, Sr. Pastor was elected as Pastor of the church in 2006. Under his pastorship God has continued to bless the church. Pastor Robertson organized the Jubilee Choir, Gospel Choir, reorganized the Male Chorus, New Members Meetings, 1st Wednesday – Prayer/Praise/and Expression night, Tuesday Noon Day Prayer, Couples Meetings, Singles Meetings, Greeters, and the Voices of Fairview (VOF) choir. He is a renown singer, teacher and preacher. Pastor Robertson has a special passion for the youth of the church. During his pastorship record breaking souls are being added to the church family. He recommended to the Deacons that they prepare for expansion of the church which in turn was manifested with his leadership and guidance from on High this new sanctuary that was dedicated back to God on March 1, 2014.

Over the years, Fairview has been blessed to have had the following Ministers announced their calling unto God to preach the Word: Minister Greg Potter, Associate Minister Earl Younger , Minister Percy Younger, Minister Knyla Harris, Minister Roy Harris, Minister Derrick Carter and Minister Dale Crews. Current Associate Ministers are Minister Dale Crews, Minister Diane Myers & Minister Leslie Waller.
We give thanks for those who in past ages built this place to give God His glory and His honor with praises and worship. We thank God for those founders and beloved members for preserving for us who are alive and living, this holy history, our heritage.

We who now live must continue on forward and draw nearer to God through Christ Jesus. May this church stand in years to come as it has stood in years past, A LIVING MONUMENT OF A SAVIOR WHO DIED as scripted in John 3:15,16 “15.